Renters Insurance, sometimes called a Tenants Policy, covers your personal property, such as clothing, furniture and electronics in case of perils like fire, theft or wind damage from a hurricane. It may also provide liability coverage, medical coverage, and temporary living expenses.

Even though you don’t own the building, it’s still your stuff, and you might be surprised with how it adds up. Your landlord’s insurance usually covers only their building and property.  Landlords policies rarely cover anything of yours. Renters insurance covers your furniture, clothes, pots and pans, and most of the items you need to live.   Basic jewelry and electronics are usually covered.  Check with your insurance carrier if you have pricy items or large collections.

Living expense coverage pays all or part of the cost of a place to live if your home becomes unlivable.

My local area has had two major apartment fires in the past few months. In both cases, a fire started at one end of the building and destroyed everything…if it didn’t burn, it was soaked with water. Residents lost everything, including their place to live.

Prices are moderate and just like any other type of homeowners insurance, premium costs depend on many factors like where you live, your deductible, your insurance company, and whether you need any additional coverage.

Floods cause a lot of damage.  There are very few small claims as just a few inches can result in tens of thousands of dollars.  Floors, wallboard, insulation, and wiring need to be ripped out and replaced.  It is reported that the annual damage from floods exceeds the damage from fires. 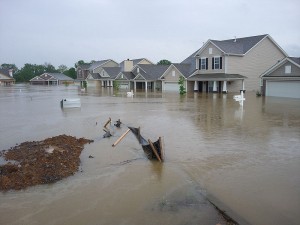 Depending on where you live, you may be required to buy and maintain flood insurance as a condition of your mortgage loan. It’s available through most insurance brokers or from direct insurers. More information is available at 1-888-RAIN924 (1-888-724-6924) or at www.floodsmart.gov.

Flood insurance covers the type of water damage that occurs when the water level in your neighborhood rises and water flows in.  It doesn’t cover other water damage like leaks or if your roof blows off and rain comes in.  It also won’t cover basements,  crawl spaces, or any areas below the ground level.  Your standard homeowners insurance might cover those situations.

Topographic maps are used to determine flood plains or areas that are prone to flooding.  If your home is in one of these areas, you should consider flood insurance.  Many mortgage providers, especially if they are government backed like FHA and VA will require it.  These maps are updated every few years.  Rates are based on many factors including your construction type, relative risk, value, and local government programs.

There is a quick search tool available at floodsmart.gov that will rate your risk and give a ballpark estimate of cost.  Exact rates usually require an inspection.  Like homeowners insurance, you will probably have a choice between purchasing Actual Cash Value insurance (paying for the depreciated value of the loss) or Replacement Cash Value insurance (paying for the replacement cost).

Homeowners insurance and dogs don’t always get along.  Policies typically cover dog bite liability, a risk that insurance companies try to avoid. Some charge more for certain breeds and others will charge more (or cancel coverage) for dogs with a history of biting.

According to the Centers for Disease Control and Prevention, these are the breeds with the greatest frequency of bites:

These are the most likely breeds to be on an exclusion list.  Insurance companies argue that their lists come from experience and actuarial tables.  Some states have restricted the use of dog breed blacklists.  I suppose, if you own one of the blacklisted breeds, you wouldn’t want it to interfere with your insurance rates, but the flip side is that if all breeds are allowed, all policy holders need to share the cost of the added risks.

Insurance companies argue that there are some 40 million plus households in the US with dogs and 4 1/2 million people are bitten each year.  One in 5 of these requires medical attention and the average dog bite claim is $29,000.That comes out to $470 million a year.

Of course the dog owners argue that their Fifi wouldn’t bite anyone!

It’s not just dogs that insurers don’t like.  If you own an exotic pet like an ape or an alligator, or an unusual domestic pet like a potbellied pig check with your insurance company.

What Does Homeowners Insurance Cover?

What does homeowners insurance cover and do for you?  Homeowners insurance covers your home and possessions against most common but not all risks. There are several levels of coverage that vary by state.  Homeowners’ policies usually don’t cover damage caused by lack of maintenance, hurricanes, earthquakes, landslides, pollution or war, although additional policies or riders may cover these.

Homeowners insurance is generally available in different levels of coverage:

What isn’t covered is sometimes more important than what is!  In order to be competitive, insurance companies issue basic policies with lots of exclusions.  Additional coverage for these exclusions is often available as add-ons or endorsements.  This includes most natural and weather events such as earthquakes, sinkholes, hurricanes, and mudslides.  Water damage is also often excluded from coverage.

Also, homeowner’s insurance generally doesn’t cover damage from neglect and failure to properly maintain the property, sometimes a difficult distinction.  For example, a roof leak caused by a covered event may be covered where a roof leak because of an aged or unrepaired roof probably won’t be.  Many lawyers earn a good living on this.

Most policies will exclude or provide minimal coverage for guns, jewelry, electronics, and boats.  Check your policy.

Most mortgage companies will require you to purchase homeowners’ insurance for at least the amount of the mortgage and name them as also insured beneficiaries.  They may purchase insurance if yours lapses.  You don’t want to do this because the insurance that they purchase will probably be overpriced, the costs are passed on to you, and the insurance covers only their interests.

Pay close attention to your policy limits. During the application process, your insurance company will determine a replacement value and insured amount. Most companies are honest with this, but some companies may use invalid figures. Try to avoid purchasing either too much or too little insurance. Remember that you’re dealing with construction costs which can vary greatly, but there’s no sense in insuring your home for more than similar houses sell for. On the other hand, if you don’t insure your home for enough, you’ll only receive the insured amount.

We use cookies to ensure that we give you the best experience on our website. If you continue to use this site we will assume that you are happy with it.Ok